Timed to precede the Jazz & Heritage Festival presented by Shell, the first Fossil Free Festival united community for one week with art, food, music, film screenings and workshops, carving out a dedicated and open space for us to dig deep into the ethics and complexities of funding art and education with fossil fuel money and to imagine a #FOSSILFREECULTURE. 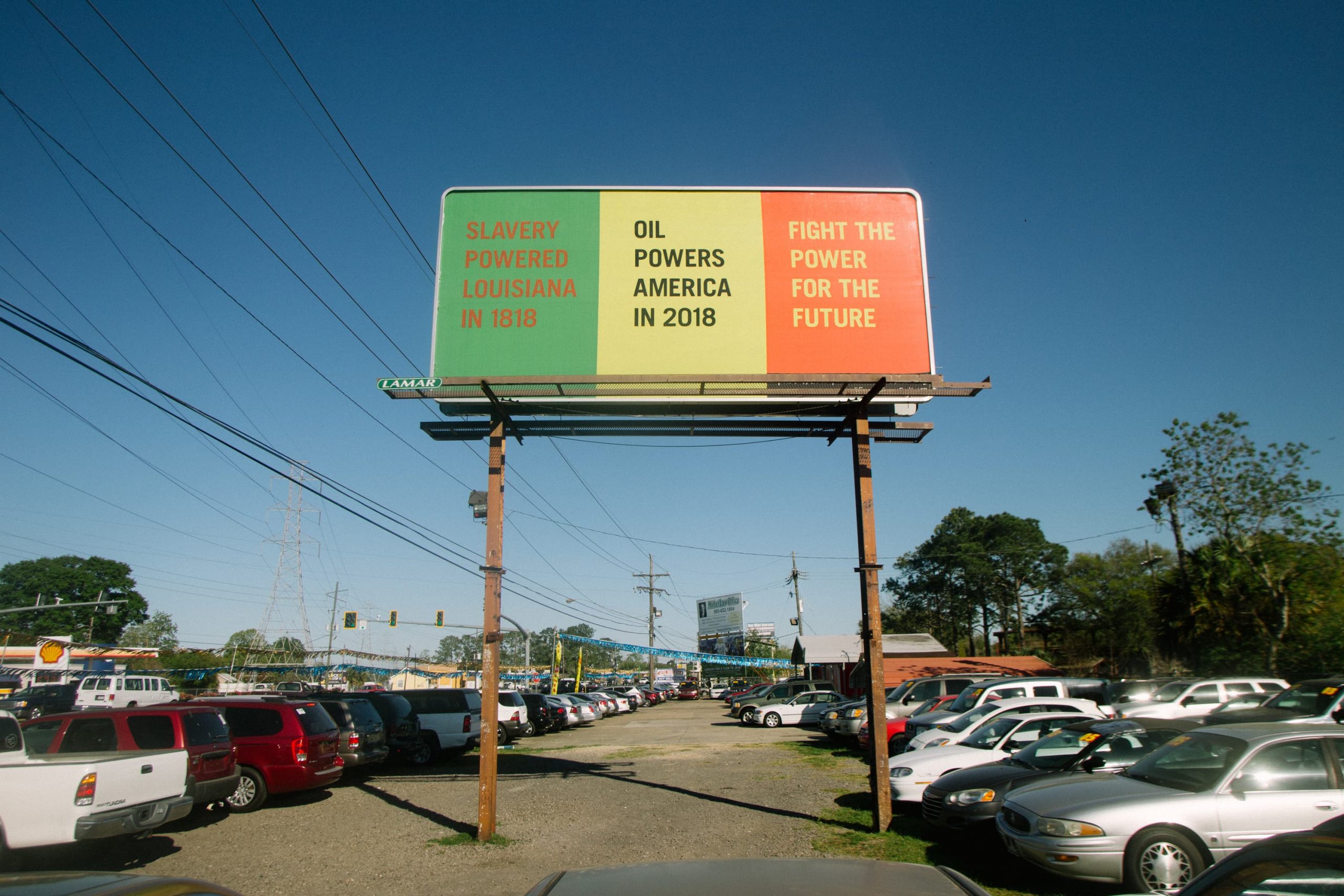 Imani Jacqueline Brown is a New Orleans native, artist, activist, and researcher. She believes that art can drive policy and orients her practice toward the ever-elusive flicker of justice on the horizon, knowing that our world cannot find balance until social, ecological, and economic reparations are won. Imani is Director of Programs at Antenna, a co-founder of Blights Out and a core member of Occupy Museums. Occupy Museums’ project, “Debtfair”, was featured in the 2017 Whitney Biennial at the Whitney Museum of American Art, New York. In 2015, Imani attended COP 21 as part of a #FossilFreeCulture delegation and there helped to establish the international Museum Liberation Movement. In 2009, she served as Oil and Gas Accountability Campaign Manager for the Gulf Restoration Network. She initiated and is Artistic Director of Fossil Free Fest. imanijacquelinebrown.net

Monique Verdin has been intimately documenting the complex interconnectedness of environment, economics, culture, climate and change in southeast Louisiana, for decades. Her indigenous Houma relatives and their lifeways at the ends of the bayous, enduring the realities of restoration and adaptation in the heart of America’s Mississippi River Delta has been the primary focus of her work. Monique is the subject/co-writer/co-producer of the award-winning documentary My Louisiana Love (2012). Her interdisciplinary work has been included in an assortment of environmentally inspired projects, including the multiplatform/performance/ecoexperience Cry You One (2012-2017) as well as the publication Unfathomable City : A New Orleans Atlas (2013). Monique is a member of the United Houma Nation Tribal Council and is director of The Land Memory Bank & Seed Exchange; an experiential project engaged in building a community record through cultural happenings, strategic installations and as a digital archive to share stories, native seeds and local knowledge. Currently, Monique is apart of the Another Gulf Is Possible Collaborative core leadership circle of brown (indigenous, latinx and desi) women from Texas to Florida working to envision just economies, vibrant communities and sustainable economies.

Raquel de Anda is an independent curator and cultural producer based in Brooklyn, NY. De Anda began her career as Associate Curator at Galería de la Raza, a contemporary Latino arts organization in San Francisco, CA. Born and raised on the U.S. Mexico border, much of de Anda’s work approaches themes of duality, connection, separation, inclusion and the intersections of migrant rights with other movements for social justice. She is a firm believer in the power of art and culture to ignite social change. De Anda holds an MS from Parsons School of Design, with a focus on integrating cultural equity in the field of arts and culture. Recent exhibitions include The Ripple Effect: Currents of Socially Engaged Art (Art Museum of the Americas, Washington, D.C.), Art in Odd Places intervention festival (NYC), and overseeing creative production for the historic People’s Climate March (NYC), with hundreds of artists and 400,000 people participating. raqueldeanda.org

Katie Mathews is a filmmaker and researcher based in New Orleans. Katie is attracted to stories that examine the intersection of identity and the places and spaces we call home. Most recently, Katie directed and produced POST COASTAL, a series of documentary shorts about coastal communities’ response to land loss in Louisiana. She is currently producing MOSSVILLE, a documentary feature currently in post production, that explores the psychological trauma of community displacement at the hands of the petrochemical industry. Prior to her work in film, Katie worked as an anthropologist and ethnographer at global design firm IDEO, where she led qualitative research, using individual stories to inspire new systems in education and the public sector. Katie holds a BA in Communications from Northwestern University and has completed graduate work in Cultural Anthropology at the University of Chicago.

Jayeesha Dutta is a tri-coastal Bengali-American artist, activist, and strategist for StoryShift at Working Films. She is part of the core leadership circle for Another Gulf Is Possible Collaborative, galvanizing the voices and experiences of brown (indigenous, latinx and desi) women from across the Gulf Coast working towards a just transition for our people and the planet. She is also the communications committee chair on Big Class/826 New Orleans board of directors and visual arts working group chair for Alternate ROOTS. Jayeesha is an avid traveler, home chef, and loves being near (or, preferably, in) any body of water. As a multi/interdisciplinary artist, she aims to make more time for dancing, singing, and participatory theater in her life. Jayeesha was born in Mobile, raised in New York, aged in Oakland and is deeply grateful to call New Orleans home.